A Torrance drone company has vividly captured how almost 5 inches of rain in a little more than a month transformed city-owned Madrona Marsh — one of the last remaining fragments of vernal wetland in the county — from a dour brown into a breathtaking splash of green habitat providing an important wildlife refuge among the urban landscape.

The soggy winter so far has seen state reservoirs reach historic highs and produced picture-perfect snowpack levels in the mountains.

And two weeks ago, the Madrona Marsh Nature Preserve released images taken by Sky Ladder Drones on Nov. 21 and Dec. 21 that illustrate how the 4.87 inches of rain that fell between those dates replenished a seasonal ecosystem solely dependent on rainfall. “The marsh comes to life,” said chief drone pilot and company owner Steven Katz, who lives nearby.

“This is a composite of 399 pictures, so it’s low altitude pictures taken at 300 feet, so they’re extremely high resolution,” he added. “If you’re a photography geek, the camera that’s flown is a 20 megapixel camera.”

For the past nine months, Katz has volunteered to fly weekly missions over the 55-acre marsh at Sepulveda Boulevard and Madrona Avenue to record the changing water levels. The composite images are edited together to create a series of time-lapse images that show the seasonal variations in the landscape.

T he marsh is a no-flight zone and Katz, a licensed drone pilot who also teaches at El Camino College near Torrance, must clear his 30-minute flights beforehand with traffic control at Torrance Airport. Then he spends several hours stitching the images together to create the stunning pictures on his home computer.

“They get a Google Map,” he added, “with 10 times the resolution, for a specific date and time that they know and they can control.

Nature preserve manager Melissa Loebl said she has used the images to track the locations of bird nests, and monitor the growth of trees and native plants, such as duckweed.

“I can even see dead trees in there,” she said. “And I use it to manage my team to create management plans.” In the last year, Loebl said, she has used the weekly images to track the proliferation of a fern-like freshwater plant called Azolla, that some researchers believe can reverse the effect of global warming.

“I literally look forward to the images every week when he sends them,” she said, “especially during the rainy season when you can see the wetlands fill.” 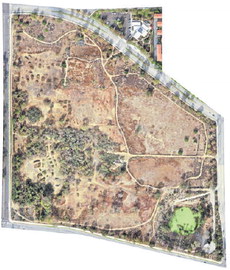 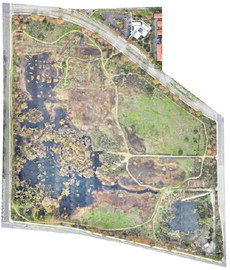 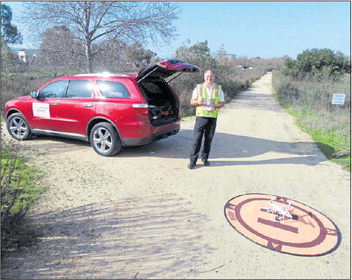 Steven Katz, the owner and pilot of Sky Ladder Drones, is volunteering his time to take high-resolution imagery of city-owned Madrona Marsh in Torrance.